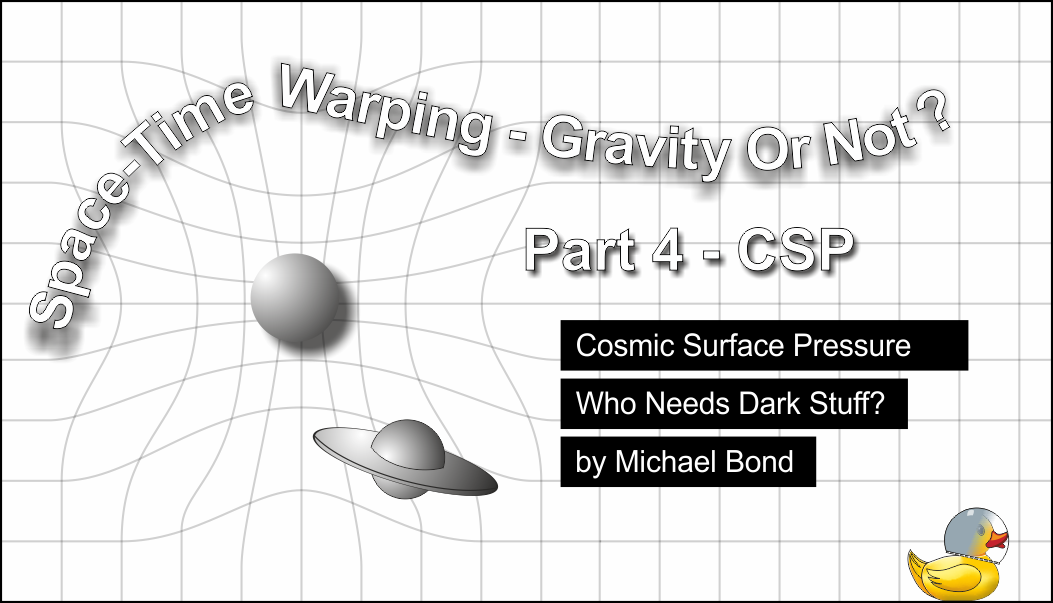 Gravity does not exist. From my meagre readings of the nature of gravity and space I believe that our understanding of the cosmos may need correction. There is no such thing as gravity. Part 4, a recap to-date – Cosmic Surface Pressure.

In my previous three articles I’ve explored some speculations about the layman’s view of space-time, the mystery of the missing mass in the cosmos and the subject of dark matter and dark energy, wherever all that stuff is supposed to be.

I want to take this moment to review the current thinking and my own idea and illustrate the basic ideas, just in case you’re getting lost.

Not Enough “Gravity” To Go Around

According to current astronomical thinking the spin of the galaxy, any galaxy, pick one, is too great for gravity to hold it all together. Which means the stars ought to be flying off like sparks on fireworks night.

They’re not flying off, so something must be holding them all together.

So some clever bodies, far cleverer than me, speculate that there must be a lot more mass in the cosmos than they can see with all their clever instruments.  This has been labelled “dark matter” and its friend “dark energy”. This is supposed to account for the vast majority of mass in the cosmos to give the additional force of gravity in the cosmos that is holding all the sparklets in their orbits around the galaxies and other fun holiday spots.

They haven’t found any of it yet.

Space-Time Is A Thing Unaccounted

I speculate that space-time itself, the bendability of space and twistiness of time, mean that there might be more to the cosmos and the fabric of space-time than we currently accept. That this “stuff” has additional properties which are acting on mass-energy (planets, apples, other goodies).

If gravity is flattening off around the edges of a galaxy, thus keeping all the mass together, that space-time has an additional property of force that is increasing “gravity”.  So gravity is not fading off in a clean linear line out from the edge of a galaxy, and taking sparkly stars with it, but more abruptly increased around the rim of the dimple in space-time that is caused by a large mass such as a galaxy.

I’ve decided to call this, now, after a little revision to my earlier thinking: Cosmic Surface Pressure (CSP).  This pressure is pushing the cosmos outwards in all directions and pushing masses together where their local gravity is intensified.

So instead of seeing gravity dissipate away from a galaxy it flattens off when the external cosmic surface pressure takes effect.

I still have to use “gravity” to label the interaction between space-time and mass-energy but now let’s consider another aspect of this and the Cosmic Surface Pressure.

The images I’ve selected illustrate the idea of “gravity” flattening out to a constant level at some point around a sun or galaxy.  Partly this acts to reinforce the gravity within the dimples of space-time that are created by large masses – galaxies.  This is the basis of the “pressure” acting on the outside of the dimples and keeping the galaxies from spinning off in all sorts of messy directions – squeezing them together.

Another way of looking at this is that gravity flattens out beyond galaxies, to a constant level.  The cosmos possesses its own “gravity” or gravitational constant where the dimples flatten out.  Because the outside pressure is squeezing down on galaxies, and other apples, and may be part of the expansion of the cosmos this constant cannot be seen as a force apply specifically on galaxies, but as the effect of expansion as it reacts with mass-energy dimples in space-time.

Whether you think of this as a cosmic gravitational constant (CGC) or cosmic surface pressure (CSP) the effect is the same in solving the issue of dark matter and dark energy as the proposed answers to holding galaxies together.

We might be able to test this with ships pushed out beyond the inner solar system and away from the influence of our own sun and planets, or we might see some effects if our instruments are sensitive enough to see any material halo around galaxies.