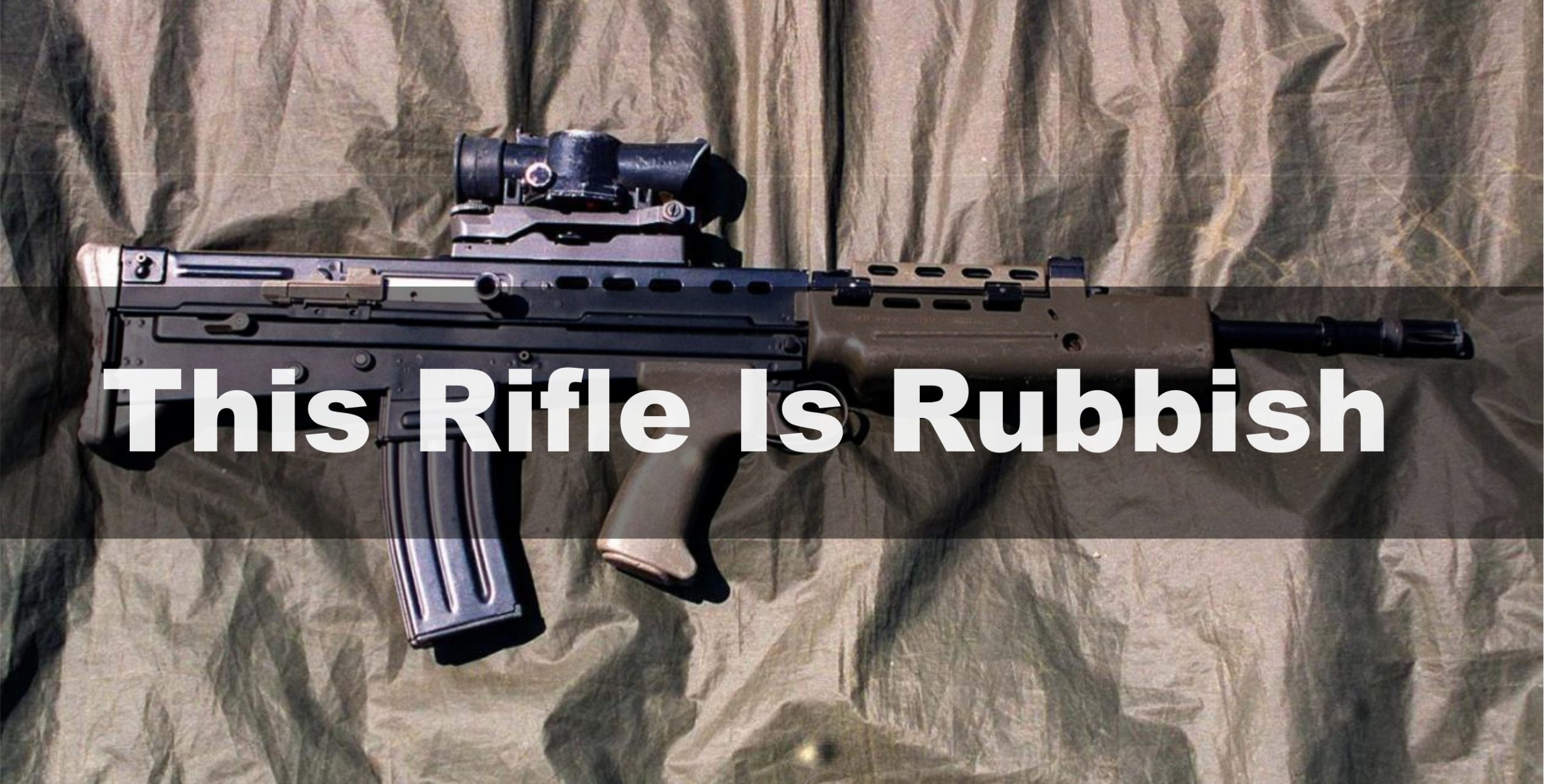 If you’re reading this you mostly likely know all about the utter rubbish that is the world-infamous British Army rifle the SA80, in all its wonky variants.  Unreliable and generally more unreliable this is the weapon the British military have had to suffer with for decades, and our enemies around the world love it. What better way to handicap the British and their exceptional history at winning little wars than to give them a piece of trash to play with.

In this brief briefing I’m going to address two points, why it’s worse than it could be and what can be done for a new generation bullpup super-rifle for the future of the British military (don’t worry you’ll never see the super-rifle, they will never let you have anything that good).

For those who are just here out of curiosity I’ll recap. The SA80 is a bullpup design, which means no rear rifle stock as the entire mechanism is pulled back to the shoulder to make for a shorter rifle and more compact in modern Western European battlefields, onborad vehicles, etc., when we eventually fight Russia, maybe, one day, like never.

So it’s completely useless against anyone else because it’s designed for one kind of warfare and we’ve been romping around the world fighting all kinds of other wars for which it’s not suited, even back to the Northwest Frontier of the old Empire (Afghanistan) where a plucky old Lee Enfield .303 rifle might have been better to shooting Taliban on that other mountain top a thousand yards away.

Forget that handicap though and I will describe the really big one: it’s only for right-handers.

Of course, the British Army confidently proclaim, anyone can be trained to use a right-handed rifle, when it’s not falling to bits, and they’re right, if you want to handicap your best shots.  You see the British Army haven’t quite learnt a CRITICAL LESSON OF HISTORY. For thousands of years left-handers have been better at shooting.

According to some biblical sources (sorry I can’t remember where this one cropped up from, go look it up for yourself) one great king in ancient times, David or Solomon, kept a regiment of left-handed slingshot warriors because left-handers were better shots.

So what to the British Army do? They take their most capable shots, all their left-handed troopers, and train them to be dummies. Handicapping the potentially best shots in your army is a great way to loose a battle.

If the British Army, and those Marines (yes, I haven’t forgotten you lot), want to enhance the performance of all troops they need the best weapons on the hands of the best.  They need a high performance rifle that is fully-ambidextrous and able to give precise, accurate fire at longer ranges for the kinds of wars we are facing now and likely to face in the future.

Welcome to the Super-rifle for super soldiers (spandex costumes not essential, unless you’re kinky that way).

It is possible to craft a new rifle, bullpup and ambidextrous, that will serve the future of the British military, and deliver it reliably and at a very affordable cost.  Drawing on the experience of building rubbish we can use simple ways to create a left/right-handed ejector with a simple plug-in adapter on a new feed for ambidextrous use (yes, we’ll even let all those right-handers play with it).

From all the recent experiences of the British military I lean towards giving it some more recoil shock protection to mount a longer barrel shooting 7.62mm to give everyone the longer accurate range essential for the wide-open reaches of the Northwest Frontier and beyond.  For shorter ranges a special modification can be made with additional tactical features I won’t discuss here.

Overall there is potential in creating a new rifle with outstanding features, but it will need a completely new mindset and willingness to step outside the tiny little MoD box.