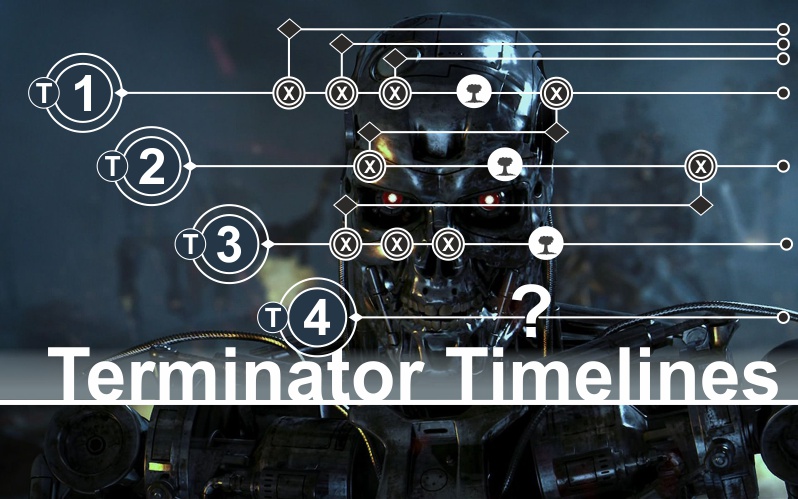 “There is no fate but what you make…”

…unless a nasty little Terminator comes from the future to ruin your day, choose a fate for you and bring the human race to an end in a holocaust war. And then you defeat it, change the future, avert the disaster or put it off for a few years, and then another Terminator comes to change it all again. And you stop it and so on in a perpetual struggle for the future of mankind against the machines.

So it goes and so goes the Terminator universe, around and around, each change throwing up new alternative futures and holocausts.

Which can get very confusing for the rest of us unless you keep track of, approximately, what is going on, with whom, when and where. Good robot, bad robot? How can you tell?

Unlike other story universes the Terminator offers us the opportunity to make bold and imaginative reboots of history. This is a different kind of rewriting the storyline that remains consistent with its own fundamental truth – there really is no fate that you cannot remake time and time again.

This can get confusing so here I’ve created a little Terminator Timeline to help understand how the stories could fit nicely together despite the constant changes between past and future. I have also thrown in a suggestion for how I might write a new Timeline.

(Updated: July, 2015 with release of Terminator: Genisys, see review below.)

This is the first timeline, following the events from Terminator through to Salvation.

Consistent in its future and history we follow the life and struggle of Sarah Connor and, following her death from cancer, her son John Connor up to and through Judgement Day and on into the war against the machines.

In each of the first three chapters of this history the altered futures of mankind and Skynet throw up one or more Terminators sent back to protect or thwart the rise of the Connors. Each time the act of time travel causes the thing that the machines were trying to stop – their own eventual defeat.

If they hadn’t sent a Terminator back to kill Sarah originally she would never have begun the dynasty that brought mankind out of the post-nuclear wilderness.

However, part of this constant time travel and interference may also have accelerated the evolution of the machines, giving them more time to become more powerful as each Judgement Day is put back and then, finally, as a TX interferes to protect Skynet on the Day itself.

Did the TX also have a mission to accelerate Skynet’s awareness of the future or just take advantage of an opportunity to do so? Did she/it programme information into Skynet on Judgement Day before heading off to complete her primary mission? Is that why Skynet was improving its techniques through the events of Salvation?

Now we have another potential universe as we see the launch of the Sarah Connor Chronicles.

Here something has happened in the future, a sophistication of Terminators, the creation of a new infiltration unit defeated by the advancement of John Connor’s skills in combating them.

Cameron is captured, reprogrammed, sent into the past and changes events. A new fate is chosen as Sarah and John are rescued and lunge forward eight years in time, by-passing Sarah’s death and informing Sarah of the danger of cancer.

Now we have something different, a new battle to hunt down the birth of a new kind of Skynet and new forces coming to our awareness. Thrown up in a new alternate future we see the suggestion of “good robots”, and the battle to –

Ah, but then something dramatic happens (it got cancelled) leaving the Connors leaping into the very heart of darkness and the post-Judgement Day world.

What happened? We’ll never know(?), but we can speculate that with Sarah still alive and driven, with the hint that she too is stalking through the ruins of a future world, she is far more influential and instrumental in the future of mankind.

This leads us to the new “reboot”, where a younger Sarah Connor is the focus of attack at an earlier age. She, we are now beginning to see, is far more important in this new “fate” than John Connor alone.

We don’t know what will happen in the forthcoming trilogy reboot, but can anticipate a whole mess of confusion, options and alternatives, actions and chosen fates for mankind as Sarah Connor rises to the challenge of making new choices.

As for the future and any more alternatives?

Inspired by Sarah’s Chronicles I’ve long speculated on the options for a much broader world-story taking in a range of other agencies before and throughout the war against the machines.

If Judgement Day cannot be averted only delayed then what happens next and who is involved beyond Sarah and John?

Another timeline is possible following these other characters in their own shadowy struggle against the horror to-come.

When the time is right for it to reboot.

Now the first in new the planned trilogy (subject to the success of this one) here are my first impressions following its release in the UK.

Terminator: Genisys
[2/july/2015] Score: 5/10
It takes a while, and reading a few explanatory articles online, to understand what’s going on in this mishmash of a story, and the audience unfamiliar with all things Terminator may be as befuddled as I was on first screening.  That is going to be a big hurdle for the film’s broader acceptance if the producers want everyone to return for two more sequels they’ve planned (but may never produce if there is not the demand for them).
Here we have a new Terminator time sequence, a new loop in time in which everything is up for grabs again as the history of the future-unwritten is rewritten in a new history (yes, you try getting your head around it).
In brief “something” happened in the future and “they”, whoever they are, sent another Arninator back to save our heroine Sarah Conner as a child.  This is not her story.
This story begins in the known future of the war against the machines and the success of the resistance as told in the original “Terminator” film.  We begin with Kyle Reece being rescued, raised and recruited to take that fateful journey back in time to save Sarah Conner in the 1980s and father the future saviour of mankind, John Conner.  Unfortunately things don’t go according to plan and the resulting chaos of a storyline would send anyone’s mind spinning.
This is the key problem with the story. It focuses more on Kyle Reece than our heroine Sarah and tries to cram a huge amount of seemingly disjointed narrative into a single film.  It might have been better to take inspiration from the original and pare the story down to a cleaner, sharper line and leave any additional plotlines for one, two, three or more sequels, to explore each theme in greater depth.  By laying so much on the audience’s lap Genisys may be expecting too much and be overloading them to breaking point.  This bodes ill for future sequels to explain all this.
Continuing the disruptive Kyle-focussed narrative it’s he who ends the film with a thoughtful voice-over about an unknown road into the future and not Sarah as per “Judgment Day”.
This final point highlights how much is taken away from Sarah and how much, amongst many points is taken from the other films. Although the story may have some original ideas it may be lost in a lot of repetition from the earlier films, perhaps too much for people to grasp without crib sheets to refer to.
(Footnote: Nice to see Sarah heeded my lessons in how to kill a T-1000 – Killing_Terminators.)
Verdict: The future is yet to be written, perhaps, or perhaps not.